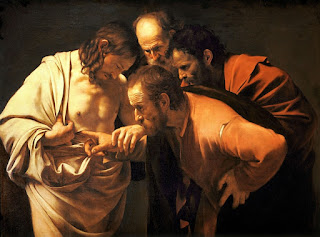 Your door’s too light to shut out God.

Young man—
Young woman—
Old man—
Old woman—
Middle-aged man—
Middle-aged woman—
Your door’s too light to shut out God.
You may think
You’re safe from trouble
And nothing can get in,
You may think
The door is barred
For fear of what has been,
You may think
That what you’ve done could
Never be forgiven,
Or most of all,
That love is gone,
Along with joyful living;
But when for all
That you’ve been through
You then expect the least,
The Lord of love
Will walk right in
And say just one word: Peace.

(The beginning is a take-off on James Weldon Johnson’s “The Prodigal Son” from “God’s Trombones.”)

When it was evening on that day, the first day of the week, and the doors of the house where the disciples had met were locked for fear of the Jews, Jesus came and stood among them and said, “Peace be with you.” After he said this, he showed them his hands and his side. Then the disciples rejoiced when they saw the Lord. Jesus said to them again, “Peace be with you. As the Father has sent me, so I send you.” When he had said this, he breathed on them and said to them, “Receive the Holy Spirit. If you forgive the sins of any, they are forgiven them; if you retain the sins of any, they are retained.”

But Thomas (who was called the Twin), one of the twelve, was not with them when Jesus came. So the other disciples told him, “We have seen the Lord.” But he said to them, “Unless I see the mark of the nails in his hands, and put my finger in the mark of the nails and my hand in his side, I will not believe.”

A week later his disciples were again in the house, and Thomas was with them. Although the doors were shut, Jesus came and stood among them and said, “Peace be with you.” Then he said to Thomas, “Put your finger here and see my hands. Reach out your hand and put it in my side. Do not doubt but believe.” Thomas answered him, “My Lord and my God!” Jesus said to him, “Have you believed because you have seen me? Blessed are those who have not seen and yet have come to believe.” Now Jesus did many other signs in the presence of his disciples, which are not written in this book. But these are written so that you may come to believe that Jesus is the Messiah, the Son of God, and that through believing you may have life in his name.

As in the style of newborn babes
We do not know what's yet to come;
Believers, by the world's strong powers
May, like our Lord, be yet undone;
And yet, there's more that's up God's sleeve,
An unformed hope by which we live,
It cannot be imagined; yet,
We trust the one who gives and gives.

Such trust is what will save our souls,
In gladness, now, our God extol!

*Name given to this day because of the traditional introit's text (in Latin) from 1 Peter 2:2: Like newborn infants (Quasi modo géniti infántes) long for the pure, spiritual milk, so that by it you may grow into salvation.” This poem was also inspired by an interview with Bishop Thomas of the Coptic Orthodox Church of Al-Quosia, Upper Egypt, at http://www.presbyterianmission.org/story/carrying-cross-without-fear/

Blessed be the God and Father of our Lord Jesus Christ! By his great mercy he has given us a new birth into a living hope through the resurrection of Jesus Christ from the dead, and into an inheritance that is imperishable, undefiled, and unfading, kept in heaven for you, who are being protected by the power of God through faith for a salvation ready to be revealed in the last time. In this you rejoice, even if now for a little while you have had to suffer various trials, so that the genuineness of your faith—being more precious than gold that, though perishable, is tested by fire—may be found to result in praise and glory and honor when Jesus Christ is revealed. Although you have not seen him, you love him; and even though you do not see him now, you believe in him and rejoice with an indescribable and glorious joy, for you are receiving the outcome of your faith, the salvation of your souls.