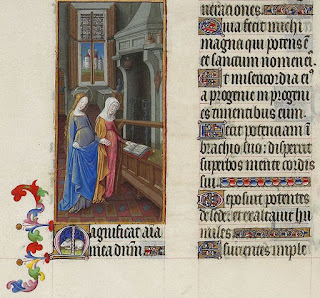 No More "Ho-hum, the reading of Scripture"

It isn't wordy explanations that I seek,
It isn't toned-down phrases that are mild and meek;
Don't stand up front in church and then apologize,
As if you need to cut a story down to size;
This news that comes today is bigger than us both,
Nor should the fact I've heard it often, make you loathe
To call out flabbergasting news with such surprise
The people catch their breaths and find their spirits rise!

It may just be that Christmas is the only time
That you can get away with old King James, sublime
In phrases like, "hath holpen," and "doth magnify,"
As Mary to her cousin - and to us - still cries!
But mostly, don't throw out the mystery and awe
For people who today, to what you say, now draw:
Give me a preacher or a reader who proclaims
This gospel text such that I know your heart's aflame.

Scott L. Barton
(Partly inspired by the narration of the Christmas story from Isaiah, Matthew and Luke by the tenor narrator, Duane Moody, at a Holiday Pops performance in Boston. It's a basically secular event, but he read it so well, and with the orchestra and chorus in the background, there were actually tears in my eyes. He actually sounded as if he was surprised by the news! Believed it himself! And couldn't help but want others to believe it, too.)

And Mary said, “My soul magnifies the Lord,
and my spirit rejoices in God my Savior,
for he has looked with favor on the lowliness of his servant.
Surely, from now on all generations will call me blessed;
for the Mighty One has done great things for me,
and holy is his name.
His mercy is for those who fear him
from generation to generation.
He has shown strength with his arm;
he has scattered the proud in the thoughts of their hearts.
He has brought down the powerful from their thrones,
and lifted up the lowly; he has filled the hungry with good things,
and sent the rich away empty.
He has helped his servant Israel,
in remembrance of his mercy,
according to the promise he made to our ancestors,
to Abraham and to his descendants forever.”

And Mary said, My soul doth magnify the Lord,
And my spirit hath rejoiced in God my Saviour.
For he hath regarded the low estate of his handmaiden:
for, behold, from henceforth all generations shall call me blessed.
For he that is mighty hath done to me great things; and holy is his name.
And his mercy is on them that fear him from generation to generation.
He hath shewed strength with his arm;
he hath scattered the proud in the imagination of their hearts.
He hath put down the mighty from their seats, and exalted them of low degree.
He hath filled the hungry with good things; and the rich he hath sent empty away.
He hath holpen his servant Israel, in remembrance of his mercy;
As he spake to our fathers, to Abraham, and to his seed for ever.