Bonus Poem: On Turning the Sentence Around (George Floyd) 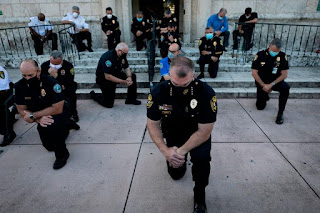 Police officers kneel during a rally in Coral Gables, Florida, on Saturday in response to the death of George Floyd.
Photo by EVA MARIE UZCATEGUI/AFP via Getty Images

On Turning the Sentence Around
(“I sympathize with them, but I don’t condone the rioting.”)

It goes without saying that no one’s “for” looting,
Or burning, destroying, or fear-causing shooting;
But if that’s all you see, then you’re missing the point,
And you’re putting on blinders, your nose out of joint,
Saying anger and violence cancel the reason
That YOU should be mad that it’s still open season
On blacks—for disturbed and unqualified cops—
When, in fact, ALL Americans ought to say STOP!
Turn the sentence around, “Yes, those fires aren’t right,
BUT it’s time white America entered the fight
So that those high on power over folks like George Floyd
Will no more have our trust, be no longer employed.
Look at cops who are taking the knee even now,
And stand up for equality, so that, somehow,
Some day (soon, I hope) race will just be a figment,
And each one’s humanity our only pigment.”

Lectionary Poems, Year A:
Surprising Grace for Pulpit and Pew

Remember that you can get these poems, plus all the poems for Year A together in one place, complete with both a scripture index (including texts sometimes referred to in a poem which aren't in the lectionary) and a title index, in my book published by Wipf and Stock. There are three ways to order:

or—best deal!—from me for a signed copy, and perhaps inscribed to a giftee, for only $14 total (mailing and tax included!) E-mail me, scott.l.barton@gmail.com. 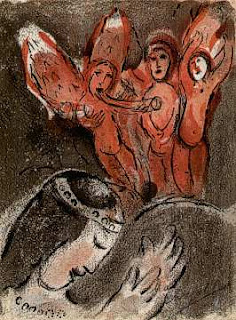 Oh, Abraham! You run to greet
Three strangers who come down the street;
You bow to them, and then entreat
Them come inside that they might eat.
What moves you, that you so reveal
Extravagance, as next you kneel
To wash their feet, and bid them rest,
As if by gracious acts you're blessed?

And then another blessing from
The visitors, while Sarah, mum,
By door, to laughter still succumbs,
Since it's as if the kingdom's come.
Oh, joy! 'Though how they'll fare's unknown,
The promise still is ne'er outgrown;
And gospel even yet ensues
To those who hospitality pursue.

The Lord appeared to Abraham by the oaks of Mamre, as he sat at the entrance of his tent in the heat of the day. He looked up and saw three men standing near him. When he saw them, he ran from the tent entrance to meet them, and bowed down to the ground. He said, “My lord, if I find favor with you, do not pass by your servant. Let a little water be brought, and wash your feet, and rest yourselves under the tree. Let me bring a little bread, that you may refresh yourselves, and after that you may pass on—since you have come to your servant.” So they said, “Do as you have said.” And Abraham hastened into the tent to Sarah, and said, “Make ready quickly three measures of choice flour, knead it, and make cakes.” Abraham ran to the herd, and took a calf, tender and good, and gave it to the servant, who hastened to prepare it. Then he took curds and milk and the calf that he had prepared, and set it before them; and he stood by them under the tree while they ate.

They said to him, “Where is your wife Sarah?” And he said, “There, in the tent.” Then one said, “I will surely return to you in due season, and your wife Sarah shall have a son.” And Sarah was listening at the tent entrance behind him. Now Abraham and Sarah were old, advanced in age; it had ceased to be with Sarah after the manner of women. So Sarah laughed to herself, saying, “After I have grown old, and my husband is old, shall I have pleasure?” The Lord said to Abraham, “Why did Sarah laugh, and say, ‘Shall I indeed bear a child, now that I am old?’ Is anything too wonderful for the Lord? At the set time I will return to you, in due season, and Sarah shall have a son.” But Sarah denied, saying, “I did not laugh”; for she was afraid. He said, “Oh yes, you did laugh.”

The Lord dealt with Sarah as he had said, and the Lord did for Sarah as he had promised. Sarah conceived and bore Abraham a son in his old age, at the time of which God had spoken to him. Abraham gave the name Isaac to his son whom Sarah bore him. And Abraham circumcised his son Isaac when he was eight days old, as God had commanded him. Abraham was a hundred years old when his son Isaac was born to him. Now Sarah said, “God has brought laughter for me; everyone who hears will laugh with me.” And she said, “Who would ever have said to Abraham that Sarah would nurse children? Yet I have borne him a son in his old age.”

Please follow this link below for my hymn for online/at home worship, Eternal Lord, Who Calmed the Waves, sung to MELITA (a.k.a. The Navy Hymn). It’s free for congregational use; just scroll the words, because the tune is well known. First Churches, Northampton did a neat thing with it on May 24, adding images of caregivers who are members of the congregation alongside the words: https://www.youtube.com/watch?v=hQ8bS1C9iGQ