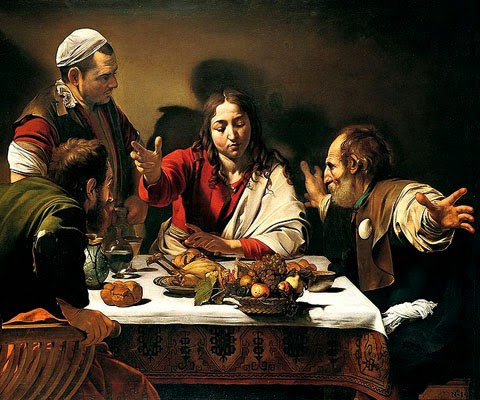 This long and detailed story makes
It seem as if the writer knew
First hand "what things" took place that day
When Cleopas, and other Jews,
Recounted to this stranger how
"Their" leaders had turned Jesus in;
If Luke was there, then even he
Can't recognize the man as kin!
And even after teaching - words
You'd think that he would recognize -
It's only in the breaking of
The bread, the Lord is now reprised;
This breaking - word made flesh - by one
Born in the place called house of bread,
Is how in each and ev'ry age
We'll see him risen from the dead.

Now on that same day two of them were going to a village called Emmaus, about seven miles from Jerusalem, and talking with each other about all these things that had happened. While they were talking and discussing, Jesus himself came near and went with them, but their eyes were kept from recognizing him. And he said to them, “What are you discussing with each other while you walk along?” They stood still, looking sad. Then one of them, whose name was Cleopas, answered him, “Are you the only stranger in Jerusalem who does not know the things that have taken place there in these days?” He asked them, “What things?” They replied, “The things about Jesus of Nazareth, who was a prophet mighty in deed and word before God and all the people, and how our chief priests and leaders handed him over to be condemned to death and crucified him. But we had hoped that he was the one to redeem Israel. Yes, and besides all this, it is now the third day since these things took place. Moreover, some women of our group astounded us. They were at the tomb early this morning, and when they did not find his body there, they came back and told us that they had indeed seen a vision of angels who said that he was alive. Some of those who were with us went to the tomb and found it just as the women had said; but they did not see him.” Then he said to them, “Oh, how foolish you are, and how slow of heart to believe all that the prophets have declared! Was it not necessary that the Messiah should suffer these things and then enter into his glory?” Then beginning with Moses and all the prophets, he interpreted to them the things about himself in all the scriptures.

As they came near the village to which they were going, he walked ahead as if he were going on. But they urged him strongly, saying, “Stay with us, because it is almost evening and the day is now nearly over.” So he went in to stay with them. When he was at the table with them, he took bread, blessed and broke it, and gave it to them. Then their eyes were opened, and they recognized him; and he vanished from their sight. They said to each other, “Were not our hearts burning within us while he was talking to us on the road, while he was opening the scriptures to us?” That same hour they got up and returned to Jerusalem; and they found the eleven and their companions gathered together. They were saying, “The Lord has risen indeed, and he has appeared to Simon!” Then they told what had happened on the road, and how he had been made known to them in the breaking of the bread.
Posted by Scott L. Barton at 8:54 PM No comments: 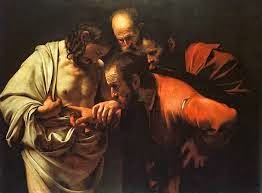 Young man –
Young woman –
Old man –
Old woman –
Middle-aged man –
Middle-aged woman –
Your door’s too light to shut out God.
You may think
You’re safe from trouble
And nothing can get in,
You may think
The door is barred
For fear of what has been,
You may think
That what you’ve done could
Never be forgiven,
Or most of all,
That love is gone,
Along with joyful living;
But when for all
That you’ve been through
You then expect the least,
The Lord of love
Will walk right in
And say just one word: Peace.

(The beginning is a take-off on James Weldon Johnson’s “The Prodigal Son” from “God’s Trombones.”)

When it was evening on that day, the first day of the week, and the doors of the house where the disciples had met were locked for fear of the Jews, Jesus came and stood among them and said, “Peace be with you.” After he said this, he showed them his hands and his side. Then the disciples rejoiced when they saw the Lord. Jesus said to them again, “Peace be with you. As the Father has sent me, so I send you.” When he had said this, he breathed on them and said to them, “Receive the Holy Spirit. If you forgive the sins of any, they are forgiven them; if you retain the sins of any, they are retained.”

But Thomas (who was called the Twin), one of the twelve, was not with them when Jesus came. So the other disciples told him, “We have seen the Lord.” But he said to them, “Unless I see the mark of the nails in his hands, and put my finger in the mark of the nails and my hand in his side, I will not believe.”

A week later his disciples were again in the house, and Thomas was with them. Although the doors were shut, Jesus came and stood among them and said, “Peace be with you.” Then he said to Thomas, “Put your finger here and see my hands. Reach out your hand and put it in my side. Do not doubt but believe.” Thomas answered him, “My Lord and my God!” Jesus said to him, “Have you believed because you have seen me? Blessed are those who have not seen and yet have come to believe.” Now Jesus did many other signs in the presence of his disciples, which are not written in this book. But these are written so that you may come to believe that Jesus is the Messiah, the Son of God, and that through believing you may have life in his name.
Posted by Scott L. Barton at 11:29 AM No comments: 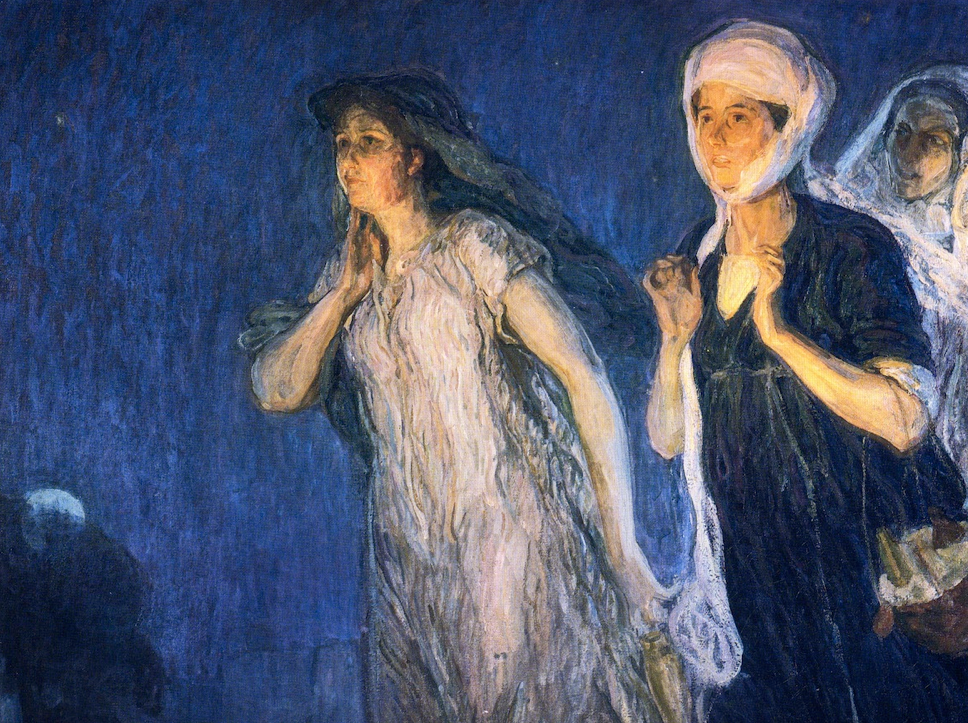 I sang a piece once
(Bach? Handel? Mozart? You tell me)
where, late in the piece,
the Gloria Patri -
"Glory be to the Father, and to the Son and to the Holy Ghost,
as it was in the beginning..."
has the same music as the opening of the piece.
Get it? Pretty clever, we singers all thought.

Thus we come to Matthew:
"Do not be afraid;
go and tell my brothers to go to Galilee;
there they will see me."
Why Galilee?
Why, it's back to the beginning, of course.
Back where the ministry started.
Do you want to see the risen Jesus?
Go back to his healing, his forgiving, his inviting
everyone into the kingdom of God.
That's where you'll see him.
Read the story again. Live it each day.

Get it? Pretty clever, isn't he?

Scott L. Barton
(The idea that "Galilee" means going back to the beginning comes from Tom Long in a Christian Century article, April 4, 2006.)

After the sabbath, as the first day of the week was dawning, Mary Magdalene and the other Mary went to see the tomb. And suddenly there was a great earthquake; for an angel of the Lord, descending from heaven, came and rolled back the stone and sat on it. His appearance was like lightning, and his clothing white as snow. For fear of him the guards shook and became like dead men. But the angel said to the women, "Do not be afraid; I know that you are looking for Jesus who was crucified. He is not here; for he has been raised, as he said. Come, see the place where he lay. Then go quickly and tell his disciples, 'He has been raised from the dead, and indeed he is going ahead of you to Galilee; there you will see him.' This is my message for you." So they left the tomb quickly with fear and great joy, and ran to tell his disciples. Suddenly Jesus met them and said, "Greetings!" And they came to him, took hold of his feet, and worshiped him. Then Jesus said to them, "Do not be afraid; go and tell my brothers to go to Galilee; there they will see me."
Posted by Scott L. Barton at 6:37 AM No comments: 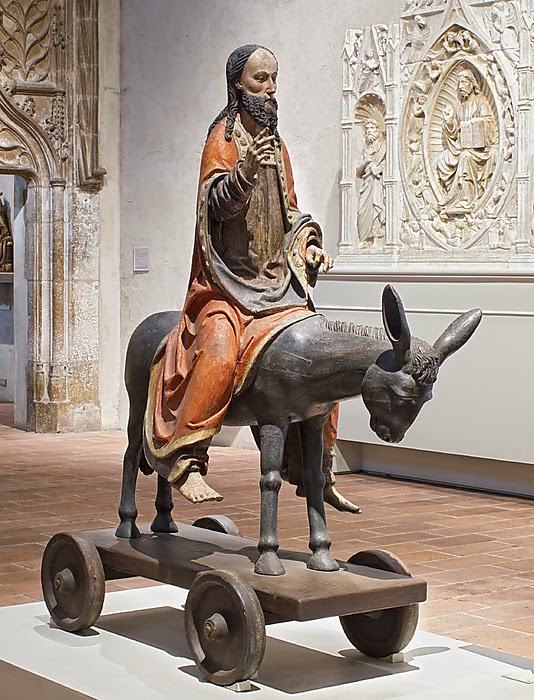 The Donkey in the Room

We like to keep our politics
Apart from Sunday church;
Woe to the preacher who would dare
The worship to besmirch
With commentary on the powers
That tend to rule the day;
And yes, it can be overdone -
And peoples' trust betray;
But Jesus, on parade that day,
Lampooned the power and might
Of Caesar, and all who in great
Display would take delight;
He's making fun of those who lord
It over people's hearts;
This Jesus, not just meek and mild,
Is brave, and heav'nly smart.

When they had come near Jerusalem and had reached Bethphage, at the Mount of Olives, Jesus sent two disciples, saying to them, "Go into the village ahead of you, and immediately you will find a donkey tied, and a colt with her; untie them and bring them to me. If anyone says anything to you, just say this, 'The Lord needs them.' And he will send them immediately." This took place to fulfill what had been spoken through the prophet, saying,

"Tell the daughter of Zion,
Look, your king is coming to you,
humble, and mounted on a donkey,
and on a colt, the foal of a donkey."

"Hosanna to the Son of David!
Blessed is the one who comes in the name of the Lord!
Hosanna in the highest heaven!"

When he entered Jerusalem, the whole city was in turmoil, asking, "Who is this?" The crowds were saying, "This is the prophet Jesus from Nazareth in Galilee."
Posted by Scott L. Barton at 6:52 AM No comments: