I Never Liked to Preach This Text

I never liked to preach this text,
What with divorcees in the fold,
Perhaps cast out by their home church,
Who marriage two would not extol;
They came for grace, not for a word
Of judgment on what had to be;
What's past, is past, we said; and who
Were we to judge such returnees?

There was a time when our church, too,
Frowned on divorce as that day's sin,
Espec'ally for the clergy, who
Were barred from pastoring church, therein.
What changed? The word of God? Or what
Our Lord said plainly to those men?
(I use that word deliberately,
Since they were wondering for their ken.)

Can we divorce, like Moses said,
- they asked to set him up - or not?
To which he noted such a rule
Protected women from their lot;
Then his disciples wanted more
In terms of what was wrong and right;
I now believe his twinkled eye
Caused them their wagging tongues to bite.

For though he says adultery
Comes when divorced man marries wife,
He said it's true the other way,
Which must have caused a lot of strife.
What woman could divorce a man?
That such a thing could never be
Thus prompted them to turn away
From rules so they might better see -

The children! - so they'd reassess
the nature of their need for law;
Except ye be as one of these,
You'll lose capacity for awe!
Try not to say who can or can't
Find love anew (or in some form
back then unknown), so you'll be blessed,
And each day's joy will be your norm.

Speaking of preaching this text, the Rev. Sarah Buteux preached an absolutely wonderful one, "Outside the Box," at First Churches, Northampton, on October 4 in which she addressed marriage, the Pope, Kim Davis, and the thing we all need, and need to hear, the gospel. You can find it here: http://firstchurches.org/outside-the-box-a-sermon-by-rev-sarah-buteux/


Some Pharisees came, and to test him they asked, “Is it lawful for a man to divorce his wife?” He answered them, “What did Moses command you?” They said, “Moses allowed a man to write a certificate of dismissal and to divorce her.” But Jesus said to them, “Because of your hardness of heart he wrote this commandment for you. But from the beginning of creation, ‘God made them male and female.’ ‘For this reason a man shall leave his father and mother and be joined to his wife, and the two shall become one flesh.’ So they are no longer two, but one flesh. Therefore what God has joined together, let no one separate.”

People were bringing little children to him in order that he might touch them; and the disciples spoke sternly to them. But when Jesus saw this, he was indignant and said to them, “Let the little children come to me; do not stop them; for it is to such as these that the kingdom of God belongs. Truly I tell you, whoever does not receive the kingdom of God as a little child will never enter it.” And he took them up in his arms, laid his hands on them, and blessed them.
Posted by Scott L. Barton at 9:36 AM No comments: 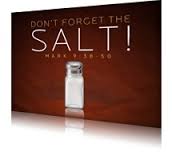 He says that I should be at peace,
and look to my own salt;
That is, my flavor should increase,
and be less apt to fault
the faith of others doing good,
as if their recipe
is somehow poison, and not food
that helps some child to see
that she is loved by God no less
than any I might feed;
Remember, that it's God who blesses -
Let none this love impede.

John said to him, “Teacher, we saw someone casting out demons in your name, and we tried to stop him, because he was not following us.” But Jesus said, “Do not stop him; for no one who does a deed of power in my name will be able soon afterward to speak evil of me. Whoever is not against us is for us. For truly I tell you, whoever gives you a cup of water to drink because you bear the name of Christ will by no means lose the reward.

“For everyone will be salted with fire. Salt is good; but if salt has lost its saltiness, how can you season it? Have salt in yourselves, and be at peace with one another.”
Posted by Scott L. Barton at 1:10 PM No comments:


What Is the Mark of Greatness When You Die?

What is the mark of greatness when you die?
Is how you've lived the way to death deny?
When Jesus broached predictions of his death,
Then his disciples almost held their breaths,
While wond'ring, if they, too, should be done in,
What might be said of them by kith and kin?
So Jesus took upon his lap a child,
And said, "Just live with trust like this."
And smiled.

They went on from there and passed through Galilee. He did not want anyone to know it; for he was teaching his disciples, saying to them, “The Son of Man is to be betrayed into human hands, and they will kill him, and three days after being killed, he will rise again.” But they did not understand what he was saying and were afraid to ask him.

Then they came to Capernaum; and when he was in the house he asked them, “What were you arguing about on the way?” But they were silent, for on the way they had argued with one another who was the greatest. He sat down, called the twelve, and said to them, “Whoever wants to be first must be last of all and servant of all.” Then he took a little child and put it among them; and taking it in his arms, he said to them, “Whoever welcomes one such child in my name welcomes me, and whoever welcomes me welcomes not me but the one who sent me.”
Posted by Scott L. Barton at 9:29 PM No comments:


I Am Not Sure I Want to Hear

I am not sure I want to hear
This word about a cross so dear
To Jesus' very heart and soul
He says that it should be my goal.
He says, behind him I should get,
Which means to follow him; and yet
I have too much to do, to give
My life, as if it's true he lives.

How can it be, when life's so brief,
And filled with heartache, pain and grief,
The Lord would still invite me where
He goes? I wish he'd not compare
His life to how I'd rather keep
All things, including those who sleep.
And yet, if I can lose my grip,
Perhaps his life might me equip.

Who do I say this Jesus is?
Can I by love show I am his?


Jesus went on with his disciples to the villages of Caesarea Philippi; and on the way he asked his disciples, “Who do people say that I am?” And they answered him, “John the Baptist; and others, Elijah; and still others, one of the prophets.” He asked them, “But who do you say that I am?” Peter answered him, “You are the Messiah.” And he sternly ordered them not to tell anyone about him.

Then he began to teach them that the Son of Man must undergo great suffering, and be rejected by the elders, the chief priests, and the scribes, and be killed, and after three days rise again. He said all this quite openly. And Peter took him aside and began to rebuke him. But turning and looking at his disciples, he rebuked Peter and said, “Get behind me, Satan! For you are setting your mind not on divine things but on human things.”

He called the crowd with his disciples, and said to them, “If any want to become my followers, let them deny themselves and take up their cross and follow me. For those who want to save their life will lose it, and those who lose their life for my sake, and for the sake of the gospel, will save it. For what will it profit them to gain the whole world and forfeit their life? Indeed, what can they give in return for their life? Those who are ashamed of me and of my words in this adulterous and sinful generation, of them the Son of Man will also be ashamed when he comes in the glory of his Father with the holy angels.”
Posted by Scott L. Barton at 5:25 PM No comments: